Carnival in the Canary Islands

Carnival, you know it sure in your city or town. The most famous is of course the carnival of Rio de Janeiro in Brazil. Also in our country are every year from February to late March here and there carnival parades to see. Are you on holiday then I can certainly recommend you the carnival on the Canary Islands. Visit sure after reading this page, the “Events” page for more Carnival in Gran Canaria

During the carnival period there are not only the parades but also some galas. The “Gala elección de la Reina” and the “Gala Elección del Drag Queen del Carnaval“. The Drag Queen Gala was in 1998 the first in Spain. Carnival without music is unthinkable. The Ritmo the Batucada is known worldwide for its rhythm. 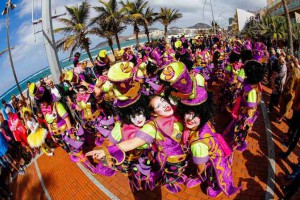 The different performances by buskers and shows are distributed across the city. The main event of the carnival in Las Palmas is located in the Parque Santa Catalina.

The inhabitants of Gran Canaria and Las Palmas take still flocking participate in the festivities. Very important for the existence of carnival is the Grand Parade (Gran Cabalgata), Los Mogollones and Burial of the Sardine (Entierro de la Sardina).

The Big Parade of the Carnival

The Grand Parade takes place every year on the Saturday after the conclusion of the two Galas. About 200 000 people visit the Grand Carnival Parade through the streets of Las Palmas. The parade is naturally accompanied by the Queens of the Carnival accompanied by stunning dressed men, women and children. Due to the warm temperatures on the island are the ladies sometimes scarce and sensually dressed. Beautifully decorated carriages provide the carnival than an extra key.

The parade is about 7 km from the Castillo de la Luz along Parque San Telmo through the city the heart of the carnival along Parque Santa Catalina to Teatro Perez Galdos.

All carnivals groups and floats will be judged by a jury, and then receive a prize. Perhaps also is the day before the Grand Parade very important . On Fridays there is a carnival parade for and with children (Cabalgata Infantil). That day are the beautifully costumed children the stars of the carnival. 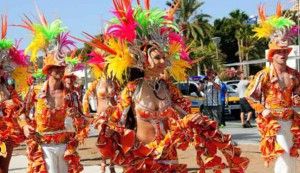 The beautiful costumes and masks for the carnival are certainly very important. These costumes give color to the whole thing. Important to know is that these suits are represented by the various associations and designers in a “Carnival Fashion Week” .which continues in the months of September and October. These costumes can be just as on a fashion show ordered and purchased . It’s a real industry where many people are doing over a whole year.


During the carnivals period celebrating many people for 5 nights in the city. This party is called the “Mogollones”. The terraces and streets are crowded with students, gays and other partygoers. There is a lot of music and dance like a “Noche de la Salsa”

The closing of the Carnival

The carnival ended on Ash Wednesday, according to an old tradition. The Burial of the Sardine (El Entierro de la Sardina). This combustion can also be found on the Carnival of Santa Cruz de Tenerife and mainland Spain.

The funeral procession of the Sardine go also through the city of Las Palmas, where he passes through important key points of the carnival. The Sardine finally get on a raft placed and burned at sea. The carnival will at least be definitively closed with a grand fireworks display.

I can imagine that you  the Carnival of Las Palmas soon or later would like to see . Through the mass of visitors i can recommend you to book your trip in time. The correct data and programs can be found on the page “Events“. The official website of the carnival in Las Palmas you can view it here. (Only available in Spanish and English)