Necropolis, do you know that?

Necropolis. Gran Canaria is not just sun, sea and sand. I have introduce you to the interior of this beautiful island. But also lovers of museums and culture coming during their vacation to their tearing. Follow me on our journey through Necropolis an archeological site in the beautiful interior

You may know all of San Bartolomé de Tirajana. A district that include Playa del Ingles, San Agustin and Maspalomas under his rule. One of the oldest archaeological cemeteries of the indigenous population in Gran Canaria is Arteara Necropolis.

The canary archaeologist Rosa Schleuter Caballero has been active all these years for this project. For her, the archaeologist as a dream come true. Since 1973 is this museum Necropolis named historical monument of national character. In 1985 has Spain Arteara Necropolis recognized as national heritage. In December 2014 is the cherry on the pie the official opening to the general public after 35 years of archaeological research.

You will discover when visiting nearly 1,000 tombs built on burial mounds. One has the stones (limestone) used of an earlier dramatic collapse of the adjacent mountain La Cogolla. During the construction of the gravestones is no mortar used to attach the stones. A small wall surrounded the 2 km long cemetery. It is a dry stone wall where you can still see a number of sections. This wall surrounds the Necropolis of a symbolic nature such as other joint tombs of Gran Canaria. 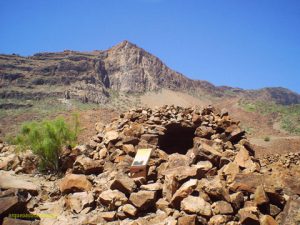 The volcanic area is highly susceptible to erosion. We climb also be a stone viewpoint built on the southern side of the cemetery. This allows you to admire from the top near the sawmill of palm trees, a place that is barely visible from the road. The view is enchanting.

The archaeological site can be found next to the village Arteara. Therefore, it is located amidst the Ravine of Fataga. The genesis of the ravine of Fataga started somewhere 26000 years ago.

The cemeteries are surrounded by green palm trees and ancient lava flows. The tombs date from the fourth century BC. The total area of the open-air museum is 137 530 m2.

Most of the graves are simple burial mounds (burial protected by a pile of stones). They do not have a complete homogeneity, but adapted to the field where we can find several isolated burial mounds associated with rocks, etc. In general, is located one body in each of the structures, but there are also tombs been found with more than one deceased person.

Where the equinoxes of spring and autumn coincide, the change of seasons, you can admire an archaeological astronomical phenomenon. There where the mountain range nearby Amurga collapsed according to the history, the sun would shine focus just on the point of the prolapse. At that moment the sun illuminates the tomb of “Sepultura del Rey” (King’s Tomb).

The municipality sometimes organizes a visit during the spring equinox in March at the Necropolis and that from the top of Amurga. Maximum 35 people can participate in the project “Yacimientos Estrella” literally translated into English “reference star”. You can inquire further for this in the information center. On the way to the nearby Ayagaures are other cemeteries that have not been excavated today. Another good tip, during your visit it can be very hot. Do not forget to bring plenty of drinking water and good shoes.

Information and transportation to Necropolis

There is an information center for you. In this center are informative panels, models and information through multimedia. The museum is open the whole year. Open from Tuesday to Sunday. October to March from 10.00 to 17.00. From April to September from 10:00 to 18:00.

The village Arteara and the archaeological site can be reached via the GC-520 / GC-60 that takes you from Maspalomas along the Arteara district. By public transport, take bus No. 18 Faro de Maspalomas – Tejeda. Price ticket for the bus € 2.10 per person.