Vegueta and the history of Las Palmas

Vegueta is the oldest district of the city of Las Palmas. The Vegueta district has been declared a Historic Artistic entirely in 1973. Vegueta, Cono Sur and Tarifa is one of the five districts of Las Palmas. Vegueta represents amounts arising on Vega where three palm trees stood, an area that has been given by the conquistador Juan regon called “Real de tres Palmas ” or “La Vegueta de Santa Ana” 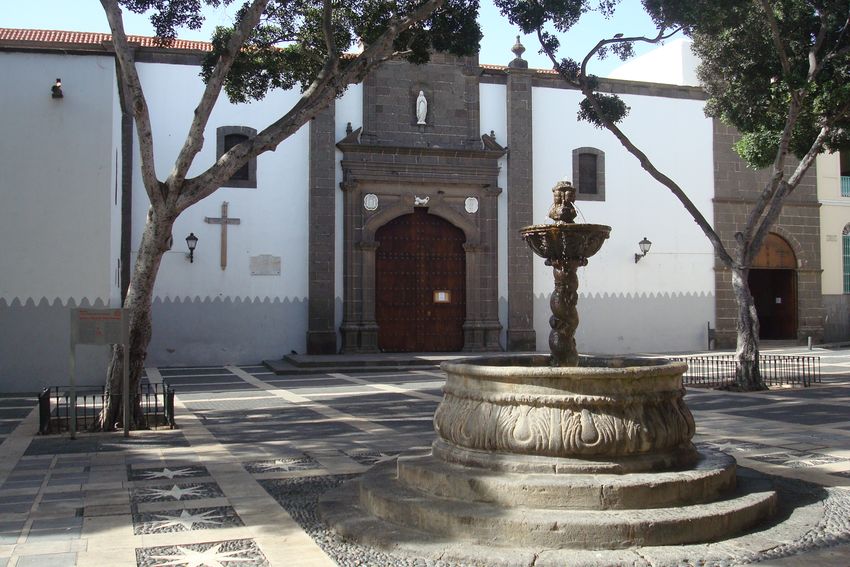 I have you already submit to make a tour through Vegueta with the cathedral Santa Ana and the eponymous Plaza Santa Ana, and finally the Literiar Cabinet. But there is much more to discover in the Old Las Palmas.

This haven of peace you will also find in a busy capital city as Las Palmas. The beautiful square Santo Domingo with on the background the church of Santo Domingo. This church is one of the oldest in the capital.

Before the church was standing here has Pedro de Vera, one of the conquerors of Gran Canaria built a chapel here The original chapel is dedicated to San Pedro Mártir, the co-patron of Las Palmas de Gran Canaria, Santa Ana and San Juan Bautista. The property was formerly a monastery church, a convent and a garden.

The Plaza de Santo Domingo belongs to the parish of Santo Domingo de Guzmán. The square was created sometime around 1841. Today does the church a service as the College of San Antonio. The square earlier called Quemadero, because at the time of the conquest was the the combustion done here of the prisoners condemned by the Inquisition. On the square you will notice especially the magnificent baroque fountain. There are nearby restaurants and bars.

We still stay in the district Vegueta de Las Palmas. Here we find on our exploration “Ermita de San Antonio Abad” Literally translated “Cell San Antonio Abad” The façade has a symmetry whose composition draws attention to the main access road, the door with a rectangular shape on the same axis that defines the other elements, up to the gladiolus Baroque façade as highlight. This is all done in gray stone quarrying

The altar of the church is in Baroque. Note the presence of the pulpit, located on the central side of the nave or aisle, is cantilevered inserted.

The pulpit was later realized in the construction of the church as a result of the structural characteristics.
Location : C/ Dan Antonio Abad, 35001 Vegueta, Las Palmas

You definitely remembers out of your school days the journey to America of Christopher Columbus. Those born in 1451 italian from Genoa, was one of the most famous explorers. In 1492 he sailed under the Spanish flag along include the Canary Islands to America.

The Casa de Colón is one of the most visited buildings in Las Palmas through the beautiful architecture. It is one of the finest in the district Vegueta. Beautiful balconies and carvings inside adorn this historic building. The House of Columbus was before the visit of the explorer a palace and residence of the first governors of the island of Gran Canaria.

Christopher Columbus would have stayed according to the history, temporarily in the house because one of his ships had to be repaired. So it’s not that Columbus actually lived here. In 1777 the palace was rebuilt or renovated, and has since become a museum, library and study center. You can read more soon on the “Museums in Las Palmas”
Location : Calle de Colón, 1, 35001 Vegueta, Las Palmas de Gran Canaria