The carnival in the town Agüimes in Gran Canaria will take place from late January to late February. Numerous festivities take place like the Gala Drag Queen, and the carnival in the streets with lots of music and dance
Dates ::
February 11, 2016 – 21:00
February 13, 2016 – 13:00
Event Location : Auditorium Theatre Agüimes, Plaza del Rosario

As every year is the Carnival of Las Palmas the major crowd puller. This year stand the carnival in the sign of Oriental nights. In the capital you feel are in the sensual Rio de Janeiro but is far more better in Las Palmas. Sources reported the first Carnival in the year 1574. Since 1976 after the fall of Franco, has the Carnival of Las Palmas received a modern touch. Today, this event is one of the biggest tourist attractions in Gran Canaria. 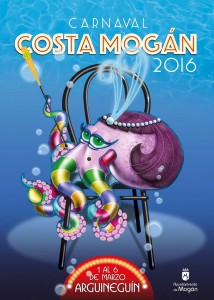 The carnival in Costa Mogán has in the year 2015 as theme “Tutankhamon“. The theme is every year different and acts in 2015, about the Egyptian civilization. That promises again a lot of beautiful things . On the poster state the sungod Ra.
Date : 1 till 6 March 2016
Events Location: Arguineguin

Due to the mostly beautiful weather with lots of sunshine is is the carnival in Maspalomas – Playa del Ingles still a topper of an event. The climate seems tailor-made for this annual carnival celebration . It is this period one big show both indoors and outdoors. Drag Queens, people disguised on the street, music in other words everything for the carnival under the sun is there.

It seems like you’re walking around in Brazil, but it is not a dream, you are indeed in Gran Canaria. Every year there is a new theme. In 2016 the theme is “Holluwood and Las Vegas” and celebrated the ’20s. The big carnival parade with floats will take place on February 27, 2016 at 17.00. The parade with floats comes along Avenida Madrid, Avenida de Italia, Avenida Gran Canaria and ends on the Avenida Tirajana in Playa del Ingles.
Date: February 19 to February 28, 2016. website
Location Events : Playa del ingles – Maspalomas

On Thursday, 02/26, there is a live broadcast of the annual carnival event “Gala Drag Queen” from Maspalomas. The broadcast can be viewed on TVE 2 and TVE Internacional. For Belgium, the Netherlands and Germany at 23.30, for United Kingdom 22.30

The theme of the “Bear Carnival” is in 2015 “The Pirates” (Los Piratas). The Beer Carnival in Maspalomas of the Gay community makes every day a real feast on land and at sea. The full program can be downloaded here.
Date: from January 30 to February 13, 2016
Location events : Various locations

As in other towns, villages and cities also organizes the municipality of Agüimes annual carnival. The cheerful carnival includes carnival parades and other festivities.
Date : From January 30 to February 13, 2016
Events Location : Aguimes ( website )
(More information about this event please send here)

The Carnival of Telde get annually visited by thousands of spectators. In Telde also become carnival held every year during the election of the Queen and Drag Queen of Telde. Just as in other towns and cities in Gran Canaria, has been Telde a Gran Cabalgata. A ceremonial procession with many floats, music and dance. The carnival in Telde, has each year a different theme. On Sunday is the combustion of the “Sardine” which closes the carnival.
Date : march 2016
Events Location : Telde – City center ( website )

Regularly I will add new carnival events on this page. All suggestions are welcome via the contact form. Still more info on the carnival page